Portable plasma cutter for the worker on the job site

By Hypertherm
Posted on 11/12/2021 in SPARK the blog, Plasma cutting
SHARE THIS

Metal cutting using advanced thermal systems, like oxyfuel (aka flame cutting) or plasma, have become the method of choice for a wide array of applications. It is very likely that you would find one of these systems being used by all types of metal workers, from artists and hobbyists to autobody repair technicians, machine shop operators, and engineers on the factory floor. For heavy industrial applications, software-driven CNC machines can be equipped for either oxyfuel or plasma metal cutting.

Let’s take a quick look at the differences between the oxyfuel and plasma techniques.

Oxyfuel cutting creates a reaction between pure oxygen and steel to make iron oxide. It is often described as rapid, controlled rusting. Preheat flames are used to raise the surface or edge temperature of the steel to approximately 962° C (1800° F, bright red color). Pure oxygen is then directed toward the heated area via a fine, high-pressure stream. The steel is oxidized and blown away to form a cavity while the preheat and oxygen stream travel at constant speed to produce an unbroken, continuous cut. The type of fuel gases used can affect various parameters of the cutting process. Acetylene, propane, propylene, and natural gas are most often used in conjunction with oxygen. The decision for which fuel gas to use depends upon the cutting application and relative costs, heat output requirement, and oxygen consumption. 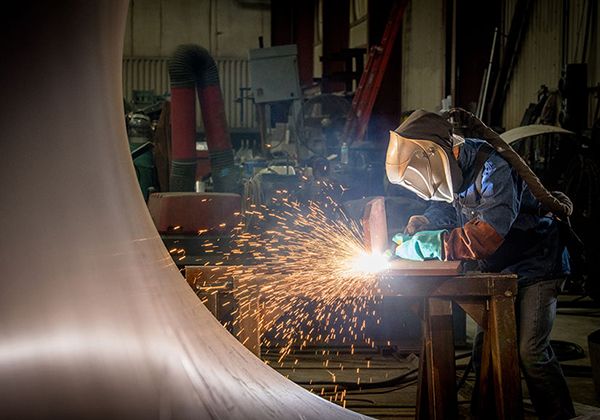 A plasma cutter or plasma cutting system uses a plasma stream to transfer energy to a conductive work material. The plasma stream is typically formed by forcing a gas such as nitrogen, oxygen, argon — or even air — through a narrow nozzle. An electric current produced by an external power supply adds sufficient energy to the gas flow to ionize it, turning it into a plasma arc. This is why the process is often called plasma arc cutting. The plasma arc cuts the workpiece by first melting it, and then blowing away the molten metal.

For this post, we’ll focus on air plasma metal cutting machines and how they are used out in the field.

The advantages of plasma cutters are well-known: high precision, cutting capacity, speed and productivity, lower operating costs, and versatility. Plasma tools can cut any electrically conductive metal, including stainless steel and aluminum, and it can handle rusted, painted, and expanded metal. The plasma cutting process creates minimal slag and typically delivers smooth cuts with a narrower kerf than those produced by an oxyfuel torch. Saving process time, the metal to be cut doesn’t need to be preheated and faster speeds can be achieved on thinners metals, with minimal or no metal distortion. Also, plasma typically outperforms oxyfuel torches when cutting stacked metals.

Because air plasma cutters do not require the use of flammable gasses, they also provide safety advantages over other cutting systems, like oxyfuel cutting tools which commonly use highly unstable and flammable acetylene as its fuel source.

Out in the field, however, which metal cutting tools are most practical as jobs may take workers to remote locations, like in a mine or on a ship? Crews might be working on a pipeline in a remote environment or in places where there is simply no access to power. HVAC contractors may be working on ladders, climbing into awkward spaces.  Of course, manual tools are always an option: old school metal snips, shears, and hacksaws can handle some lightweight metal cutting jobs, but the work is slow, and the cuts are typically crude. Portability is a key criterion. Early on, oxyfuel cutters were thought to be more practical for off site work since they don’t require electrical power or an air compressor, as is the case with plasma cutters, and operate at most any site.

However, technological advances have now made plasma cutting a standard, portable option. The new generation of plasma cutters have been designed for portability: they are lightweight but deliver enough power to cut through almost any metal. Now having a lightweight, easy to set up, portable plasma cutter is an essential tool for anyone working with metal. Also, the need for electrical power is not an issue on most jobsites as engine-driven generators are commonly available.

The Hypertherm Powermax® family of portable plasma cutting systems is a great example of lightweight tools that pack a powerful punch in a variety of applications. The Powermax30® AIR takes portability a step further as it features a built-in air compressor which means workers only need a power source and the tool itself. Essentially, this portable 13.5 kg (30 lb.) metal cutter can be operated anywhere and boasts the same advantages as its larger siblings – superior cut quality, fast cutting speeds, low operating costs, and the ability to cut a variety of metal types and thicknesses.

See how we’ve made plasma cutting accessible for the metal workers on the move.

Posted in SPARK the blog, Plasma cutting
Tagged with Powermax torches and consumables
SHARE THIS

We thought we'd start a list of some jobs that require plasma cutting outside of the shop or in the field somewhere.

Plasma cutting on the go

Earlier today, Hypertherm introduced a brand new product to its line of Powermax air plasma systems: the Powermax30 AIR. The Powermax30 AIR is unique in our line because it features an internal air compressor.

Oh the debate as to which is the best process could go on and on. Truth is, they're both great processes.