Are there consumable bargains? Not so much.

By Hypertherm
Posted on 10/27/2015 in SPARK the blog, Plasma cutting
SHARE THIS

Today’s plasma systems can produce exceedingly nice cut parts with little or no post-production processes. Yet, a plasma system is only as good as the consumable parts in the torch. Purchase knock-off (sometimes called after-market) consumables and your system’s performance could suffer.

Often time, people don’t think about the engineering and precision that goes into the engineering and manufacture of plasma consumables. Isn’t it just a piece of copper machined in a certain shape? Some might have you think so, but in reality, Hypertherm consumables contain a lot of hidden technologies, most patented, and are machined to extremely tight tolerances (eight times narrower than a human hair) to deliver the cut quality and life expectancy people have come to expect.

And then there’s the cut quality. When engineering our consumables, Hypertherm doesn’t just look at how long they last; we look at the cut quality they deliver. We look at ISO:9013 ranges. For those of you unfamiliar with ISO:9013, it is a standard that defines the cut quality of thermally cut parts. Cuts are rated on a range of 1 to 5. A Range 1 is best with minimal angle, Range 5 is worst. 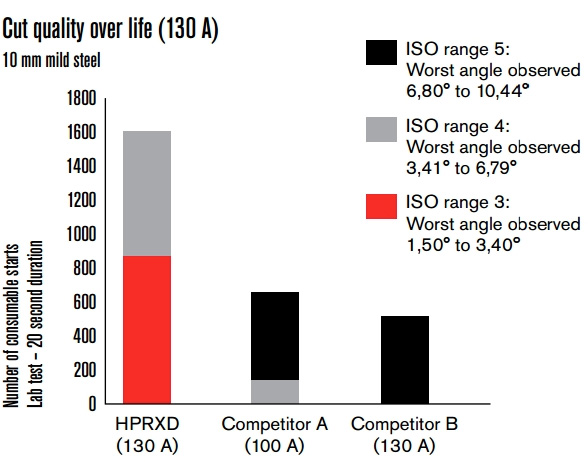 Granted, the results shown on this chart are based on controlled laboratory testing, and as any metal fabricator knows, any number of factors can impact your final result. Still, hopefully the point is clear. Not all consumables are equal.

Posted in SPARK the blog, Plasma cutting
Tagged with HPRXD torches and consumables
SHARE THIS