Plasma cutter vs torch – you make the call

By Hypertherm
Posted on 12/22/2021 in SPARK the blog, Plasma cutting
SHARE THIS

When it comes to cutting metal, most fabricators would point to plasma cutting or oxyfuel cutting as the two most popular techniques. Both techniques have their pros and cons, advantages and disadvantages, and cheerleaders and detractors. And, as you might expect, choosing the most suitable cutting system for the job is not necessarily straightforward. The choice depends on the application, the type and thickness of the material to be cut, quality of the cut, operational costs, location of the job, and many other factors.

In this post, we’ll examine some of these factors. But first, let’s look at how each technique works. 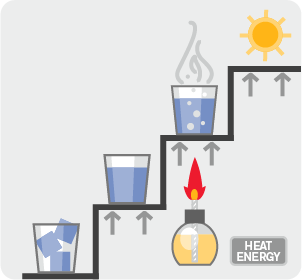 A plasma cutter or plasma cutting system uses a plasma stream to transfer energy to a conductive work material. The plasma stream is typically formed by forcing a gas such as nitrogen, oxygen, argon – or even air – through a narrow nozzle. An electric current produced by an external power supply adds sufficient energy to the gas flow to ionize it, turning it into a plasma arc. Therefore, the process is often called plasma arc cutting. The plasma arc cuts the workpiece by first melting it, and then blowing away the molten metal. Plasma cutting is suitable for a wide variety of applications, such as straight cutting, bevel cutting, gouging, hole cutting, fine feature cutting and marking. You can learn more about plasma cutting here on our ‘Plasma cutter technology’ page.

Oxyfuel cutting is a chemical reaction between pure oxygen and steel to form iron oxide. It can be described as rapid, controlled rusting. Preheat flames are used to raise the steel's surface temperature to approximately 962° C (1,800° F, bright red color). Pure oxygen is then directed toward the heated area in a fine, high-pressure stream. As the steel is oxidized and blown away to form a cavity, the preheat and oxygen stream are moved at constant speed to form a continuous cut. There are four basic fuel gases used most frequently in combination with oxygen for this process: acetylene, propane, propylene, and natural gas. Primary uses and applications (although not limited to just these) include cutting steel for fabrication or dismantling; heating parts for bending, straightening, or heat treating; and loosening stuck, rusty parts and bolts during repair work.

Both techniques are widely used in a variety of industries, including general fabrication and job shops, automotive restoration, construction, HVAC and mechanical fabrication, mining, shipbuilding, and even artworks, signs, and ornamentation. The techniques can also be used with software-driven, motion control systems on a CNC table.

Now, let’s take a closer look at some of the strengths and weaknesses of each for different types of jobs.

Type of materials to be cut 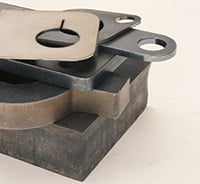 Plasma cutters can work with most any electrically conductive metals, including both ferrous metals such as carbon steel, cast iron, and stainless steel, and non-ferrous metals such as aluminum, brass, and copper. Oxyfuel cutters only work with metals that are easily oxidized, which excludes copper, stainless steel, and aluminum, which are commonly used in metalworking shops.

Plasma torches are typically used for metals up to 2 inches thick, although plasma can cut material up to 6 inches in thickness. In addition, plasma can cut thinner metals faster than oxyfuel torches while causing little to no metal deformation. Oxyfuel is more often used for cutting thicker carbon between 2 and 12 inches.

Plasma torches produce more accurate cuts because they cut fast with little slag, resulting in clean cuts with a smaller kerf (the width of the actual cut) than oxyfuel torches. With oxyfuel cutting, the skill of the operator is the most significant variable in determining cut quality. Another factor is the requirement for preheating the substrate. With plasma cutting, the workpiece doesn’t need to be pre-heated as it does with an oxyfuel system, which saves a significant amount of time.

In most cases, the upfront capital costs for plasma systems are higher than oxyfuel systems, however, the long-term, operating costs are lower with plasma especially when gas canisters are not needed. In addition, for work that requires clean, precise cuts, oxyfuel cuts could cost more if any post-cut clean-up work is needed. 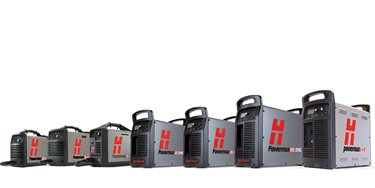 Oxyfuel torches have always been a popular choice for fieldwork because of their high portability – they don’t need electricity and require only a torch and gas canisters and can pretty much operate anywhere. Plasma cutters, on the other hand, require only an electrical hook-up and compressed air. However, technological advances mean today's plasma systems are smaller and lighter than ever. For example, the Hypertherm Powermax family of portable plasma cutting and gouging systems provide optimal performance on metals up to 1-1/2 inches thick. Hypertherm’s most portable unit, the Powermax30 AIR plasma cutter, weighs less than 30 lbs. and includes a built-in air compressor, allowing metal cutting anywhere there is single-phase power. On most remote job sites, power isn’t an issue as an engine-driven power generator is typically on hand.

Oxyfuel systems require storage or handling of dangerous gases which is not the case with plasma cutting systems.

In conclusion, both cutting methods can usually get the job done, but each technique has some advantages depending upon the material type and thickness and the final application of the metal.

Still wondering which cutting process is best for you? Visit our ‘Choosing a cutting process’ page to learn more about the types of cutting methods and some of their capabilities. Plasma cutter vs torch – you make the call

Most metalworkers would agree that plasma cutting and oxyfuel torches are the most popular metal cutting tools. Both have advantages and disadvantages. Which is the right tool for the job?

Benefits of air plasma vs. oxyfuel

When it comes to cutting metal, two widely used thermal processes are oxyfuel and air plasma. Although oxyfuel is proven, plasma is more versatile—and less expensive—with a better performance record.

This particular story comes to us from Burford Plumbing in Jackson, Mississippi where Airgas just now replaced a Hypertherm HT40C with a Powermax65 air plasma system.