By Hypertherm
Posted on 06/24/2014 in SPARK the blog, Plasma cutting
SHARE THIS

By now you've hopefully read our post on the electrode. The next consumable we are going to cover in our series on acceptable vs. non-acceptable consumable wear is the nozzle.

Though it may not look like anything special, Hypertherm nozzles are actually very carefully engineered and manufactured to handle extreme heat. The temperature of the plasma arc exiting the nozzle orifice is about 25,000 degrees F. If you think about it, the fact that an electrically energized arc of that temperature can exit through a copper nozzle without instantly melting it is pretty amazing.

To withstand the heat and last a long time, our engineers patented a vented two piece nozzle design, or to quote Hypertherm's Jim Colt, "an engineering masterpiece that provides for HyDefinition class cut quality with extremely long life." The design of our HyPerformance HPR nozzles incorporates a proprietary gas swirl technique to create a centrifugal effect that effectively creates a cool layer of un-ionized gas between the arc and nozzle. In addition, engineers used a double constriction two piece design to increase energy density, release some gas pressure to the atmosphere, and then increase the energy density again to up to four times the density of conventional plasma. (By the way, most of these features were invented by Hypertherm and are not available on aftermarket nozzles.)

When it comes to evaluating wear, you'll want to focus on the tip of the nozzle where the orifice is located. When new, that orifice is going to be perfectly round with no nicks, and very sharp defined edges. As it wears, the edges may start to round a bit as shown in the photo below. You may also get some metal debris or splatter on the end. This is okay provided the shape of the orifice remains perfectly round without any nicks. As any change in the shape of the orifice will impact cut quality, Hypertherm recommends using a jeweler's eye loupe or even a microscope to carefully examine the orifice. 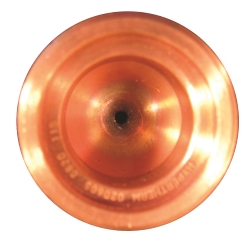 In comparison, the photo below shows a badly damaged orifice that will no longer provide good cut quality. 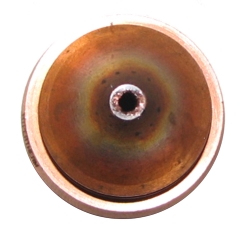 The inner bore of the nozzle is equally important. Again, you want to be sure the orifice is perfectly round with no nicks or heavy arc marks. In the photo below you can see that the orifice is notched. Like the nozzle above, the nozzle below is more than ready for the scrap bucket! 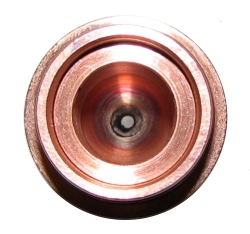 When looking at the inner bore, you may see gray / white residue or black / gray swirl marks. This is normal. The residue is hafnium oxide and is easily cleaned with a pencil eraser, while the swirl marks are carbon tracks formed during the start of the arc.