Hypertherm introduces the new Powermax45 XP, successor to the best-selling Powermax of all time

Hypertherm, a U.S. based manufacturer of plasma, laser, and waterjet cutting systems, is excited to announce the release of the new Powermax45 XP®—successor to the best-selling Powermax of all time—offering the most power and versatility in its class.

Delivering 6.5 kilowatts of output power—70 percent more than many competitive systems—the new system is extra powerful, allowing it to cleanly cut material up to 5/8” (16 mm) in thickness, and sever material nearly twice that thickness. Similar to the Powermax45 before it, the Powermax45 XP is even more versatile. A new low-amp process makes it easy to mark, score, and make precision gouges, while the lighter design makes it more portable. The versatility is further enhanced by the availability of 11 different torch styles for handheld and mechanized use plus a variety of consumable types for specialized cutting and gouging applications.

The system comes with many Hypertherm only technological innovations including an all new Duramax™ Lock torch which has a torch disable switch for quick replacement of consumables, a FastConnect™ torch to quickly switch between different torches, and Smart Sense™ technology that automatically adjusts gas pressure and flow for optimal performance.

“As the successor to the world’s most popular plasma, Hypertherm is setting a high bar with the Powermax45 XP by delivering more cutting power and faster cut speeds, plus the ability to do more than just cut and gouge with the new marking capability,” explains Russ Diefenbach, product manager for Hypertherm Powermax systems. “At the same time, the system is lighter and comes with many more torch options and specially designed long-lasting consumables to keep operator productivity high and operating costs low.” 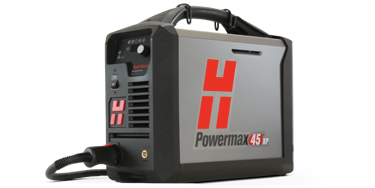