Hypertherm, a U.S. based manufacturer of industrial cutting systems and software, today announced the release of Design2Fab® 6, a major update of its popular sheet metal layout software for HVAC duct, mechanical, kitchen, industrial roofing, and other specialty fitting layouts.

This new version is the most significant Design2Fab update since the software was acquired in 2004. It features an entirely new interface and powerful tools like an advanced modeling engine for its 3D geometric renderings. Better graphics, fluid movement, and real-time updates are just a few of the benefits end users will see. Other improvements include easier dimension entry, an unlimited number of zones, easy arrangement of fittings with drag and drop functionality, ProNest® nesting software integration, and more.

“We devoted numerous development resources to design and deliver a product unlike any other Design2Fab version in the past. It’s powerful yet simple to use,” explained product manager, Steve Bertken. “The main screen is clean and elegant so instead of having multiple screens with a multitude of buttons, the new Design2Fab 6 offers a simple, modern approach that will make it easier to get the job done quickly.”

Engineered to dramatically reduce the time it takes to develop and lay out flat patterns, Design2Fab is known for its superb versatility. It allows users to create both HPGL and DXF output formats. They can use a plotter to print an HPGL layout for manual cutting or use a CNC cutting machine to produce fittings from the DXF files. In addition, prior to CNC cutting, users can export the DXF files to ProNest, ProNest LT or ProNest LTS nesting software for optimal material utilization.

Current Design2Fab users with an active Software Subscription can upgrade to the new version at no additional charge and continue to receive unlimited technical support, and other benefits. More information is available at http://kb.hyperthermcam.com. 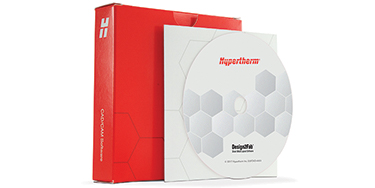 Design2Fab® sheet metal layout software is Hypertherm’s HVAC program for the design and layout of specialty fittings for ductwork and other mechanical applications.