The company and products

Larmer Welding is located in the northwest corner of South Dakota. Generally a very rural area, the town saw rapid growth in the last few years due to the oil boom in the area. Williston sits on top of the Bakken Formation, the largest oil reserve in the United States, and lends its name to the Williston Basin, a huge subterranean geological feature known for its rich deposits of petroleum, coal, and potash. Larmer Welding fabricates parts used for manufacture and repair of various equipment needed for pipelines, oil wells, and so on.

Tyree Larmer had been using two Powermax65® plasma cutting systems, one for hand cutting and one on a Shop Sabre cutting table. He noted that he had been using those systems hard, regularly cutting and piercing beyond the rated capacities. “I probably have about 5000 hours on them combined,” he notes. With the growth in energy-related projects in the Williston area though, Larmer Welding began getting more orders for parts that were at the upper end of, or even beyond, the Powermax65’s 3/4" cut capacity and 5/8" pierce capacity. “I’m cutting lots and lots of 3/4" and 1" steel.”

Given his positive experience with the Powermax65s, Larmer hoped to add a larger Powermax system, the Powermax125®, to his shop. The 1-1/2" recommended cut and 1" pierce rating would increase the range of parts he could cut with plasma and increase his productivity. The Powermax125, though, requires 480 V, 3-phase electrical service, something Larmer Welding did not have. When the power company quoted more than $70,000 just to run the service to his shop, Larmer put his plan on hold.

When Larmer heard about Hypertherm’s new product, the Freedom 38 PPA™, a 38 kW diesel generator with an integrated air compressor and a Powermax125 on board, He thought he might have found a solution to his problem. Intended to provide plasma cutting and auxiliary power to remote job sites, the Freedom 38 PPA can only be run outdoors. But that didn’t present an obstacle. Mechanized torches for the Powermax125 are available in several lead lengths, including 50 and 75 feet. And the Freedom is designed with fork truck slots so that it can easily be moved. The cutting table is positioned near a large overhead door and Larmer simply moves the Freedom outside when in use and brings it inside next to the table for storage.

Larmer saw immediate benefits on a new part that he is now cutting. The 2' x 4' oval flange is cut from 3/4" steel and has two large holes and 46 bolt holes around the perimeter. Before he got the Freedom, Larmer was cutting the shape with the Powermax65, but drilling the 46 bolt holes. For each part, it would take one hour to drill out the holes. With the greater capacity of the Powermax125 found in the Freedom 38 PPA, he now cuts those holes in 12 minutes, effectively allowing him to complete 5 parts in the time it used to take to do one.

Best of all, Larmer notes, the Freedom “doesn’t cost anything when it is not running.” Running 3-phase power to his shop would have come with an increase in both his monthly base electricity cost and his metered usage. The Freedom uses readily available diesel fuel. Since it has 480 volt 3-phase and 120 volt 1-phase auxiliary outlets, it can even be used to power other equipment when needed. “The Freedom has been very good for me,” states Larmer.

The Freedom 38 PPA was last manufactured in December 2018, and is no longer available for sale from Hypertherm. We continue to make original replacement torches, consumables and repair parts. 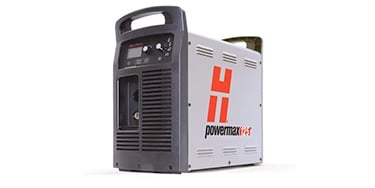