Is plasma a viable alternative to laser?

Laser is renowned for delivering excellent fine feature and hole cutting thanks to its narrow kerf – roughly 0.2 mm to 0.4 mm (008"–.015") on mild steel with oxygen and even narrower when using nitrogen to cut mild steel up to 25 mm (1") in thickness. Fiber laser also produces excellent cut angularity and can cut to very tight tolerances, in the range of 0.007" (0.2 mm).

However, Hypertherm’s invention of high definition class cutting, along with continued advances in torch and consumable technology and the introduction of XD technology in 2008 are responsible for markedly improving the cut capabilities of plasma over the past two decades. And now a new class of plasma cutting, called X-Definition™, is further enhancing plasma’s ability to tackle high precision applications. When installed on a high quality cutting machine, equipped with linear ways and elliptical racks, for example, Hypertherm’s new XPR300™ plasma system, featuring X-Definition cutting, is capable of maintaining ISO 9013 Class 1 and 2 tolerances and ISO 9013 Range 2 and 3 cut quality.

Further, an XPR300 plasma system can deliver edge surface finish that is generally smoother than fiber laser in the thicker ranges and extremely consistent edge quality over the full life of a consumable set. 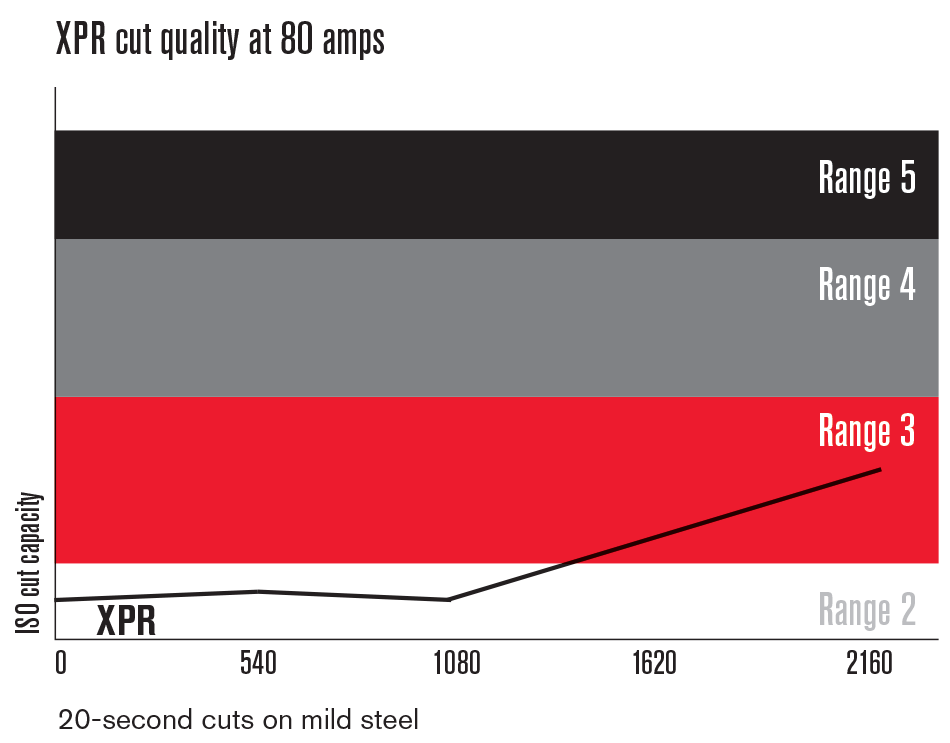 As plasma kerfs can range from 1.5 mm (0.05") thickness on very thin metal and up to about 5 mm (0.225") on 25 mm (1") thick material at 300 amps, a laser system can actually be the best option if extremely fine feature cutting or small holes (with a less than 1:1 thickness to diameter ratio) are required. But, if high quality perimeter cuts are called for, and tolerances in the range of 0.020" are acceptable, the higher cut speeds associated with plasma, especially when cutting material thicker than 10 mm (3/8"), could make plasma a better option. At this thickness, for example, a 170 amp plasma X-Definition process would deliver high quality cuts at speeds two times faster than a 4 kW fiber laser using oxygen.

In addition, Hypertherm’s invention of the True Hole® process for mild steel in 2008 and further refined with the launch of the XPR300 provides the ability to easily fabricate bolt ready holes down to a diameter-to-thickness ratio of 1:1.

Another application which may favor plasma is bevel cutting. Especially with the advent of True Bevel™ technology, it has become much more feasible to cost-effectively bevel cut right on the cutting machine and eliminate secondary operations. And, because cutting bevel angles increases the effective thickness of the plate being cut, plasma can have a significant advantage.

In addition, it is important to consider the initial investment cost associated with an X-Definition plasma system as compared to laser. A complete XPR300 plasma system mounted on a high quality cutting machine and capable of cutting 25 mm (1") at speeds of more than 1,900 mm/min (75 ipm) would likely cost somewhere between $175,000 and $225,000. A comparable laser system can easily cost three to four times more depending on the power level.

Beyond this, plasma is a much more forgiving process when it comes to cutting so called “dirty” steel such as plate with oxidation and other imperfections. It really makes no difference to the plasma arc. This is not true, however, with fiber laser. Lastly, while plasma does require personal safety devices for noise and glare protection, fiber laser systems require the construction of a safety enclosure around the entire system to protect from the potential harm of the fiber laser beam.