How can I become more productive?

When it comes to industrial cutting, productivity – or a lack thereof – can come down to three things. Cut speed, cut quality, and system run time. Hypertherm’s new XPR300™ addresses all three aspects of productivity by creating a system that cuts faster, cuts better to reduce (and even eliminate) secondary operations, and improves system run time through the use of “smart” technology and time-saving steps.

By virtue of having 300 amps and 63 kilowatts of power, as compared to the 260 amps of its predecessor, the XPR300 will cut faster. The exact speed increase will depend on the material thickness you are cutting, but generally you can cut 10 to 20% faster on material between 15 and 40 mm in thickness, 38% faster when cutting material 50 mm in thickness, and nearly 50% faster when cutting 60 mm thick material.

In addition to cutting faster, the XPR is more efficient than the HPR260XD®. As the chart below shows, the XPR300 only needs 170 amps to equal the cut speed of an HPR260XD set at 200 amps. Not only can you cut faster, you’ll use less energy in the process.

Moving on to cut quality, the XPR300 introduces a whole new class of cutting called X-Definition™. This class of cutting improves cut quality as measured using ISO 9013, an international standard that defines the quality of thermally cut parts. This standard uses a scale of 1 to 5, with a Range 1 cut considered best. The new XPR300 provides ISO Range 3 cut quality for nearly the entire lifespan of the consumables. In comparison, Hypertherm’s HPRXD® systems tend to provide a Range 4 cut quality. 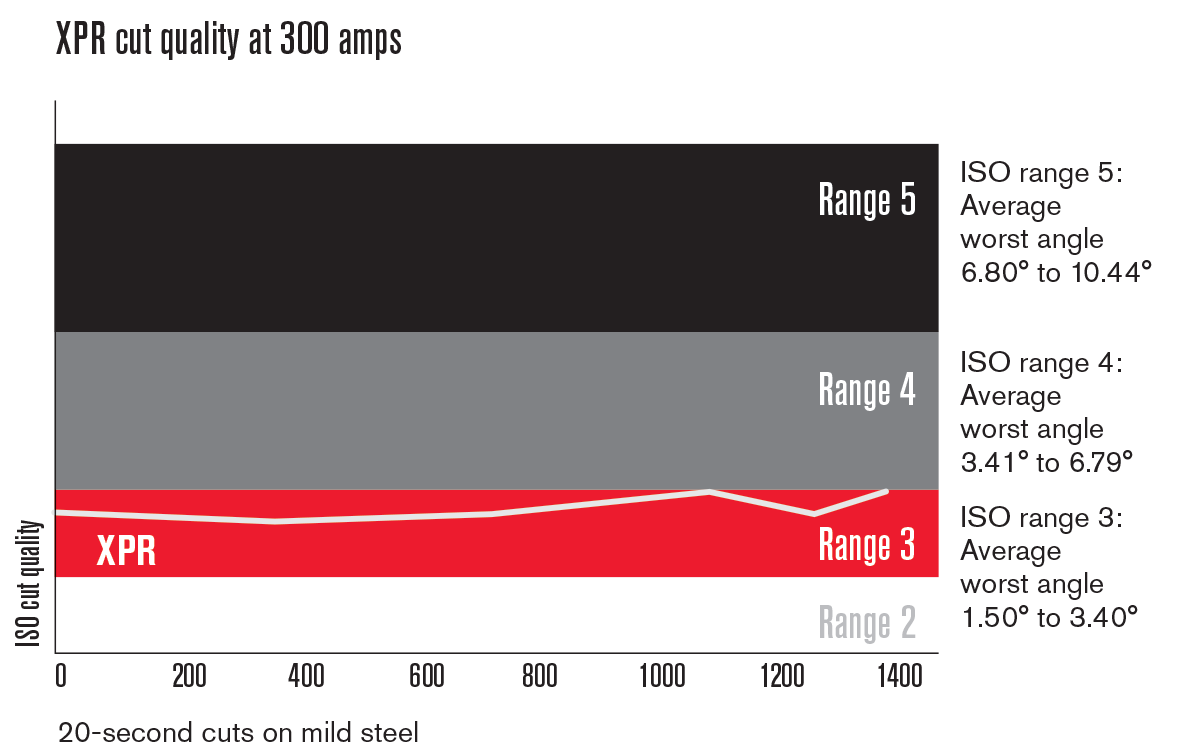 Though the chart above captures results achieved when cutting 20 mm (3/4") mild steel, laboratory testing shows an ISO Range 2 cut quality on thinner mild steel using lower current settings. In addition to improved cut quality, the other thing to note is the consistency of the cut. As the chart shows, during laboratory testing in which hundreds of 20 second cuts were made, the cut quality was remarkably uniform. A part cut with brand new consumables looked pretty much identical to a part cut using consumables with more than 1,000 starts on them.

The significant advance in cut quality applies to mild steel cutting in addition to stainless steel and aluminum. It is the result of several new technologies. One of those processes, patent pending Vented Water Injection™ (VWI), combines a nitrogen plasma gas with a water shield to better align and focus the plasma arc. A second, called Vent-to-shield, reclaims hydrogen from the vented plasma gas and mixes it with the shield gas. The result of these two technologies are squarer cut edges, less angularity and an improved surface finish when compared to the HPR. The XPR also utilizes a process called Advanced arc stability to steady the plasma arc and new arc segmentation protocols for holes that surpass Hypertherm’s already industry leading True Hole® process.

Additionally, the system is designed with fewer consoles and connections so operators can spend less time setting-up and more time cutting. Features that help here include a connection device called EasyConnect™ which allows an operator to quickly plug the torch into the torch console without the use of tools. A patent pending QuickLock™ electrode delivers easy ¼ turn tightening further reducing job setup time, while a new design enables an operator to rapidly change a torch using just one hand. All consoles feature advanced autogas capability allowing operators to select and implement all cutting jobs directly from the CNC and WiFi in the power supply to monitor the system (or multiple systems) from afar.

System uptime, not to mention overall operating cost, is further driven by consumable life improvements. A patent pending feature called Cool nozzle™ provides liquid cooling directly to the nozzle for a 40% increase in the life of the consumables. Patented PowerPierce® technology does essentially the same thing to the shield. It sends liquid cooling to the shield causing it to actually repel molten metal during piercing so the shield doesn’t get damaged. A valve in the torch receptacle delivers more rapid and precise control over gas flows for significantly longer oxygen process life and a greatly accelerated ramp down process. This elimination of ramp down errors in most applications equals a consumable life span nearly 3 times longer than any other system as demonstrated below. Less time spent changing consumables equals more time cutting and on other value driven activities. 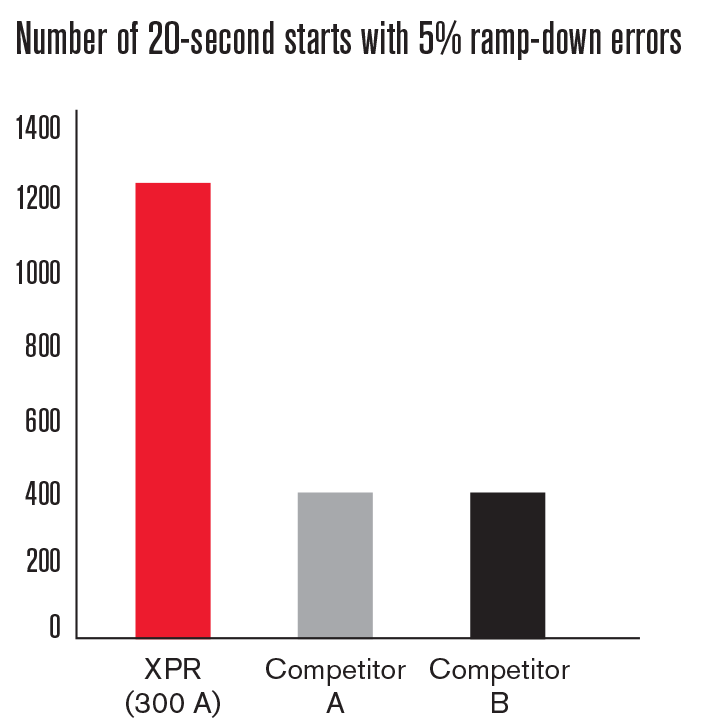 So there you have it. A combination of faster cut speeds, improved cut quality, and greater system uptime result in greater productivity from the XPR300.