Processing metal is a hard job. It is hot, dirty, and physically demanding. Metal is heavy, and depending on the size of the plate, difficult to move. The metal becomes even more challenging to maneuver once parts are welded together into subassemblies or final products. To further complicate matters, companies – from small job shops to major operations – must deal with cost constraints, tight deadlines, staff shortages and employee safety.

One simple way to take on some of these challenges is to invest in new technology when it is introduced. The addition of a longer plasma cutting torch, for example, immediately improved productivity and operator safety for three routine jobs at three companies.

Hokes Bluff Welding & Fab, a metal fabrication and manufacturing job shop in Hokes Bluff, Ala., always used an oxyacetylene hand torch to cut up skeletons after mechanized cutting – a process that was inefficient and time consuming. Even worse, the operator began to suffer back and knee pain from long hours of bending over the table and repeatedly igniting the flame torch with a striker. After switching from oxyfuel to a Hypertherm Powermax® 105-amp plasma system equipped with a 4-ft.-long torch body, the shop saw immediate improvements in productivity and operator safety. 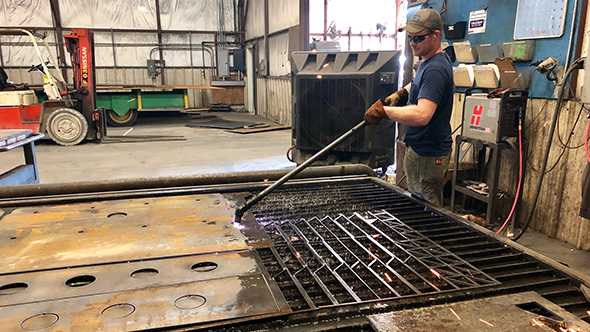 “I love the long plasma torch,” explains Billy Cherry, a welder and machine operator at Hokes Bluff. “It’s a lot faster than oxyfuel and I don’t need to carry a striker in my pocket to light it like I did with the oxy torch. It keeps my back and knees from hurting because I don’t have to bend over or squat down. I can move as quickly as the plasma system cutting the profiles, so cutting scrap can be done immediately after a profile is cut. Then, I can load another plate with little to no downtime.”

Cherry isn’t alone. Many plasma operators using a longer plasma torch report skeleton removal from heavy industrial CNC beds is so fast that jobs that previously took an hour with the oxyacetylene torch are now finished in less than 15 or 20 min. Thanks to the quick-disconnect torch feature found on newer Hypertherm Powermax plasma systems, it’s easy to alternate between a traditional plasma hand torch and the longer torch.

“The long plasma torch has made everything faster and easier for us,” Cherry says. “I love it because I can just keep moving. It maximized production so much that we added on to our table. We doubled the length of the cutting bed from 10 ft. to 20 ft. and purchased a second 105-amp plasma system with the long torch. Now we have a long torch at both ends of the bed.”

Also impressive is the ability to drag cut. Cherry simply rests the long plasma torch at the edge of the skeleton and drags the angled cutting head along the metal. He calls this a back saver because he does not need to hold the torch up off the workpiece to cut.

Demolition companies tearing down buildings and other facilities, such as decommissioned nuclear plants, refineries, sports stadiums, and municipal water towers, often have performance incentives built into their contracts. Completing the job faster saves on labor costs and helps companies with large-scale projects earn more money on the job.

In addition to speed and profitability, Pinto Construction Services, a contractor in Buffalo, N.Y., discovered longer plasma torches made demolition jobs safer to perform. The company relies on a 4-ft.- and a 6-ft.-long torch body, both connected to Powermax 125-amp plasma cutting and gouging systems.

“The industry has seen an evolution of demolition techniques,” says George Panepinto, the second-generation owner of Pinto Construction. “This includes everything from hand wrecking and wrecking balls to oxyfuel torch cutting, mobile mechanical shears and controlled demolition explosives, and now the long plasma torch. The goal of each method was and is to minimize risk. It’s important to apply the latest techniques to systematically reduce the danger.”

Panepinto knows that many in the industry will still reach for the oxyacetylene torch, but he recognizes the technological shift a long plasma torch creates. He knew plasma cutting always had the advantage of speed over oxyfuel, but it wasn’t until the addition of a long plasma torch that it truly became a viable tool for demo work.

“Large steel tanks and other non-ferrous metal vessels are particularly difficult to dismantle due to heavy epoxy coatings, built-up paint and rust,” Panepinto explains, adding that using a long plasma torch helps manage exposure to toxic fumes and dust by creating a safer distance from which to work. Air quality for the worker can also be improved substantially as one component of an engineered solution to help meet OSHA personal exposure limits.

“We tested with the long plasma torch, and it’s a proven solution,” Panepinto says. “Some storage tanks are damaged due to unexpected catastrophic events or intentional wrecking activities. Many times, stored energy develops in the metal components of a structure. The plating and structural steel members are under significant tension so jostling the structure around can cause the metal to snap back in the direction of the operator. This is dangerous and can’t be treated lightly. The long plasma torch allows operators to maintain a safer stand-off distance as that energy is gently released.”

Cunningham Metals, a family-run recycling center out of Russellville, Ark., struggled with stainless steel scrapping. They used a shear in the shop, but their operators fought with an endless variety of metal shapes and strenuous cuts. This physically demanding work created bottlenecks and risk to workers. On top of that, the company missed out on lucrative opportunities when they were forced to sell old machinery, too large for the shear, to a middleman.

Without the right tools, Cunningham Metals missed out on many opportunities. By investing in a Powermax 125-amp plasma system with a long plasma torch, the company could perform these bigger jobs in-house. The portability of the plasma allows them to work in their yard and even deconstruct machines on-site at any one of the dozens of manufacturing plants in their area. This setup also improved working conditions for their employees, thus increasing overall productivity. 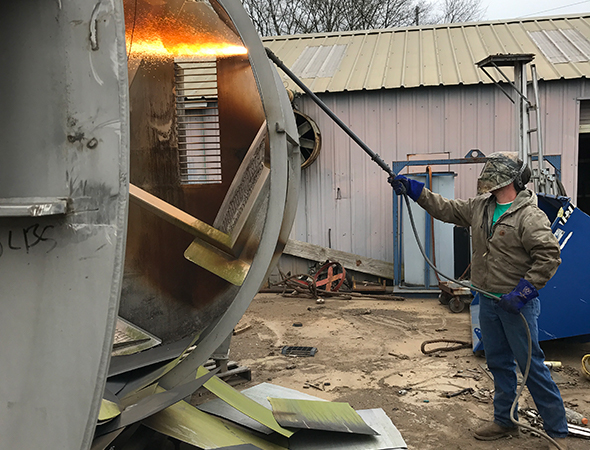 “The portability is great,” says Johnny Cunningham Jr., the owner and operator of Cunningham Metals. “We’re not tied to any building, and we’re doing more with one guy. I can put a worker out in the yard and they can scrap all day. This allows another operator to work on the shear, and because we no longer need to make large or long cuts, the shear is more productive. The operator isn’t injured or slowed down by difficult cuts.”

Cunningham says manufacturers will never get rid of the shear or the oxyfuel torch, but every scrapper can benefit from having a long plasma torch in their yard.

“It is one of those tools that no one can live without,” he claims. “We’ve gained productivity with stainless processing. We can easily cut stainless into the 4-ft.-by-4-ft. pieces required by most steel mills for recycling.”

The word from scrap yards is that operators are safer with a long plasma torch and scrapping jobs take half the time when a long torch is added. The long torch makes the job safer and faster to do by allowing the operator to stand farther away from the cut while avoiding awkward reaches, which improves operator endurance and stamina.

A long plasma torch is safer to use for all these jobs, allowing operators to work from comfortable positions. The length of the torch body and the angle of the cutting head lets operators stand upright and at a distance, while still gaining the access they need. Simply adding a long plasma torch to their arsenal of tools can have a positive impact on the productivity and profitability of large and small job shops alike.