Shaving is part of many morning routines, just like breakfast. It is easy, quick, and mostly painless, save for a small nick now and then. It wasn’t always that way though. Before the advent of disposable razor blades, shaving was saved for special occasions. Most people would actually go to a barber for fear of cutting themselves with the open steel blade that had a not so endearing nickname, the “cut throat”.

The story with printers is similar. Early printers were so dangerous, a fire extinguisher was included with each one, just in case. When your toner started to run out, you didn’t just change out a cartridge, you called a team of specially trained technicians to your office.

Shaving and printing, seemingly different, but the same in that both were radically changed by the invention of a cartridge. Instead of a single blade that required sharpening, you now had a disposable blade, fixed at an ideal angle for shaving, with a built-in guard to protect your skin. Instead of calling a special team to add more toner to your printer, you could just remove the old toner case and replace it with a new one.

Fortunately, you do not need a specialized team to change out your plasma cutting consumables. Most operators figure it out by reading the operator manual or watching someone else do it. Still, it is not the most intuitive thing in the world to do. First you need to identify the right parts, assemble them in the correct order and orientation, and then install onto a torch. It takes time, especially if you have several plasma cutting systems or if you routinely switch processes. You spend a lot of time hunting down parts and installing consumables. For air plasma systems, you are dealing with five different parts—the shield, retaining cap, nozzle, electrode, and swirl ring—so it can be easy to make a mistake. You could put something in backwards or accidently grab the wrong part, install everything in the torch, and not even realize anything is wrong until you have started cutting again.

And that’s not even the hardest part. For most operators, the harder part is knowing when to change consumables. You do not want to stop and inspect all the parts too often, as that eats into your productivity. At the same time, you cannot wait too long. Cut quality will suffer and you risk damaging your entire stack-up or torch if your electrode fails. Again, on a single system, this likely is not a huge problem, but if you are running a business and have multiple systems, this can start to impact your productivity. It can also cut into profits, since consumables can make up a pretty good portion of your overall plasma operating costs.

Until now, the challenges described above, were just that, challenges. Plasma operators and business owners had to learn to deal with it. They put processes in place and invested time to train new hires on how to inspect and change consumables. They did not have a choice.

Until now. New Powermax SYNC® systems from Hypertherm feature a revolutionary single-piece cartridge that replaces the traditional consumable stack-up. Just as the introduction of a cartridge completely transformed shaving and printing, plasma cutting is seeing its own transformation with the Hypertherm cartridge. Instead of minutes, changing out consumables will now take seconds. You can grab a cartridge, place it onto the torch, give it a quarter turn, and you are ready to cut or gouge. 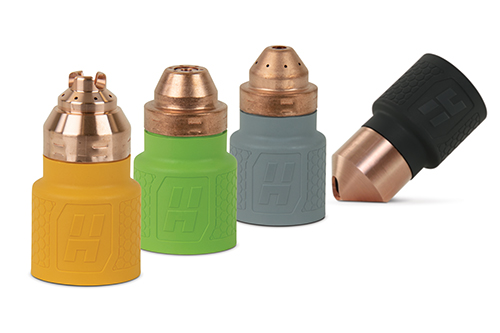 Another great feature of the cartridge: color-coding. You won’t have to guess whether you have installed the right cartridge for the process you want to use. You will know based on the color. Yellow for drag cutting. Gray for mechanized cutting. Green for gouging. Black for specialized jobs like flush cutting. Powermax SYNC systems also solve the “when to change” problem by letting you know when the cartridge needs to be replaced. No more worrying and stopping to inspect your consumables. No more throwing away half used or damaged parts. No more time ordering and tracking down parts. And imagine the time saved on training?

Because the cartridge is manufactured as a single-piece consumable, everything is perfectly aligned and optimized, ensuring maximum life and minimal waste. A Hypertherm cartridge will last longer—up to twice as long—as a traditional stack-up and provide improved cut quality when using a mechanized torch. It even looks at your usage patterns, tracking things like number of starts and arc-on time, so you can identify trends, and make your operation more efficient.

Thanks to Powermax SYNC, plasma operators will one day look back and laugh at how complicated changing consumables used to be and try to imagine life without the cartridge that simply makes plasma cutting better, easier, and more cost-effective.

Learn more about the Hypertherm cartridge. Powermax SYNC: Green is for gouging When it comes to cutting metal, plasma cutting is one of the easiest processes to learn. Unlike oxyfuel, in which repeated practice is needed, most people can successfully cut metal within minutes, if not seconds, of picking up a plasma torch. Hypertherm’s new cartridge consumable provides better cut quality and lasts longer than traditional consumables. In addition, when paired with our new SmartSYNC® torch, it automatically chooses the correct operating mode and amperage and lets you know when a new cartridge is needed