Hypertherm, a U.S. based manufacturer of industrial cutting systems and software, this morning introduced two new systems at EuroBLECH, an international sheet metal exhibition underway now in Hanover, Germany. Those systems are the XPR170™, which joins the XPR300™ as the only two X-Definition™ capable systems in the world; and the industry’s first predictive maintenance waterjet pumps, called HyPrecision™ Predictive, to substantially reduce maintenance costs and disruption caused by non-planned service.

A combination of engineering advances and refined high definition plasma processes help the XPR170 with X-Definition class plasma deliver unmatched plasma cut quality on thin to mid-range thickness metal. The cut quality advances are especially notable on non-ferrous metals like aluminum and stainless steel because of numerous patent-pending processes that create squarer cut edges, markedly less angularity, and excellent surface finish. At the same time, the system cuts faster and uses power more efficiently than earlier generation systems. Consumable life and cut quality over the life of the consumables get a dramatic boost thanks to patent-pending technology that protects consumables from the negative impact of ramp down errors, helping XPR consumables last up to last three times longer.

“We’ve enjoyed changing peoples’ perceptions of plasma since the introduction of the XPR300 with X-Definition plasma a year and a half ago,” said Phil Parker, product marketing manager for Hypertherm’s Heavy Industrial line of plasma systems. “Even experienced fabricators are surprised by the precision they are seeing, and we have seen more than a few instances where fabricators have adopted XPR plasma with its lower initial investment cost, instead of laser.”

The company’s new generation of waterjet pumps—called HyPrecision Predictive—are equipped with features such as Hypertherm’s proven Advanced Intensifier Technology and new patented technologies that adjust for pressure and temperature, oil viscosity, and hydraulic system wear parts; along with technology that enables customers to use seals up to 40 percent longer. In addition to technologies to increase performance and reduce system downtime, HyPrecision Predictive pumps are designed with ease of service in mind. Features such as a color-coded junction box, electrical cable harnesses, quick-disconnect fittings, and an easy access bleed-down valve all make maintenance faster and less expensive. Safety is also considered. A clear window cover lets the operator see the intensifier and attenuator. Optional electrical interlocks prevent unauthorized access and can automatically stop the pump when opened. Finally, Seal Maintenance Technology™ helps keep the top deck and shop floor free of oil and water.

“In engineering this system, we worked to really understand the pain points that companies using waterjet face. Without question, the number one issue was surprise system downtime,” explains John Caron, waterjet product marketing manager. “Our new HyPrecision Predictive systems are engineered to eliminate that pain point, while delivering increased productivity and performance, improved serviceability and safety, and lower maintenance costs.”

In addition to EuroBLECH, Hypertherm will showcase both systems at this year’s FABTECH which takes place early next month in Atlanta. People interested in learning more can also contact any authorized OEM or visit www.hypertherm.com. 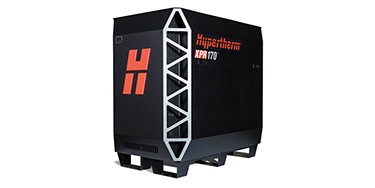 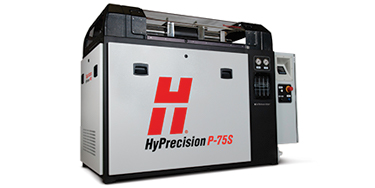 Hypertherm announced a new name for its HyPrecision™ and Echion™ waterjet pumps. It is rebranding these market leading intensifier-based pumps as DynaMAX™ to unify the naming of its intensifier pumps.